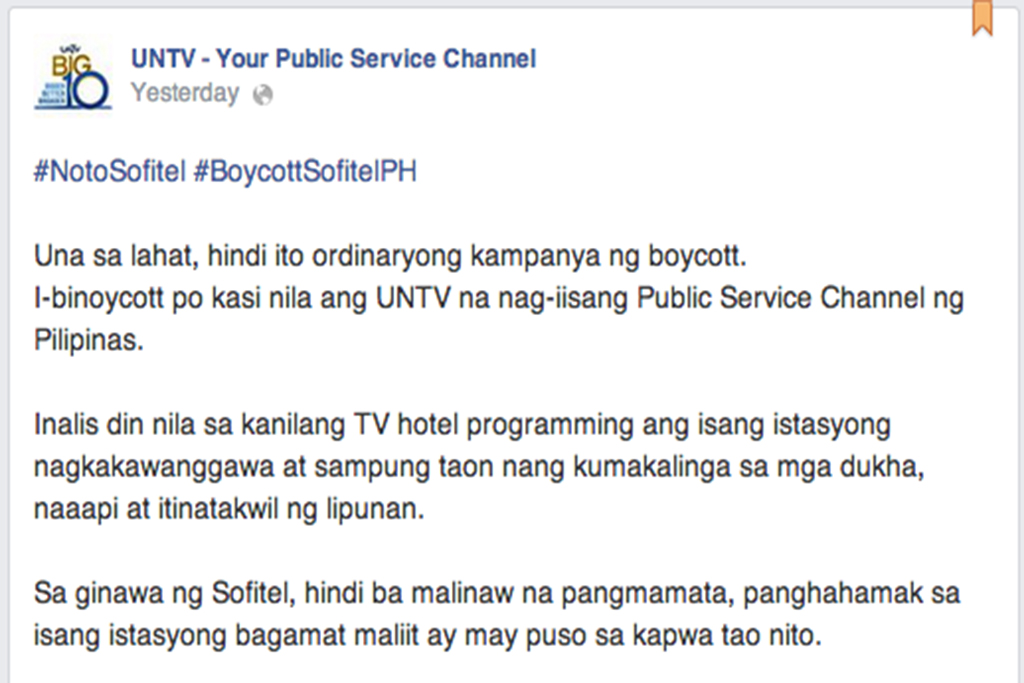 (UPDATED with comments from Sofitel: 4:20 pm, July 15) Apparently, channel wars are not limited to network bigwigs ABS-CBN and GMA 7.

UNTV yesterday morning launched the hashtag campaigns #NotoSofitel and #BoycottSofitelPH against the five-star luxury hotel for allegedly removing their channel in the hotel’s channel listing.

The campaign was announced by television host and current CEO of UNTV Daniel Razon in his morning show “Good Morning Kuya.”

“They (Sofitel) removed UNTV from its channels,” John Erick De Ocampo, one of UNTV Radio’s hosts explained in a phone interview, “We offered to give them digibox in case the channel’s reception is poor but they still turned it down.”

De Ocampo said that UNTV is part of the must-carry channels, so the hotel has no reason to remove it.

Since then, Facebook walls and Twitter timelines have been exploding with posts and tweets with supporters lamenting on the removal of the “only public service channel” in Sofitel’s televisions.

Really @sofitelmanila? U remove UNTV in your TV lineup because it helps a lot of poor people? What a shame! #NoToSofitel #BoycottSofitelPH

Wherever the tri-colored emblem is, injustice, oppression and discrimination surely follows. This has to stop! @BroEliSoriano #NotoSofitel

This afternoon, the official Facebook page of Sofitel Manila released a statement regarding the matter.

UNTV’s supporters have been decrying that the network has been a victim of “media discrimination,” but religious leader and minister of Members Church of God International Bro. Eli Soriano seemed to look into another layer on the de-listing of the channel.