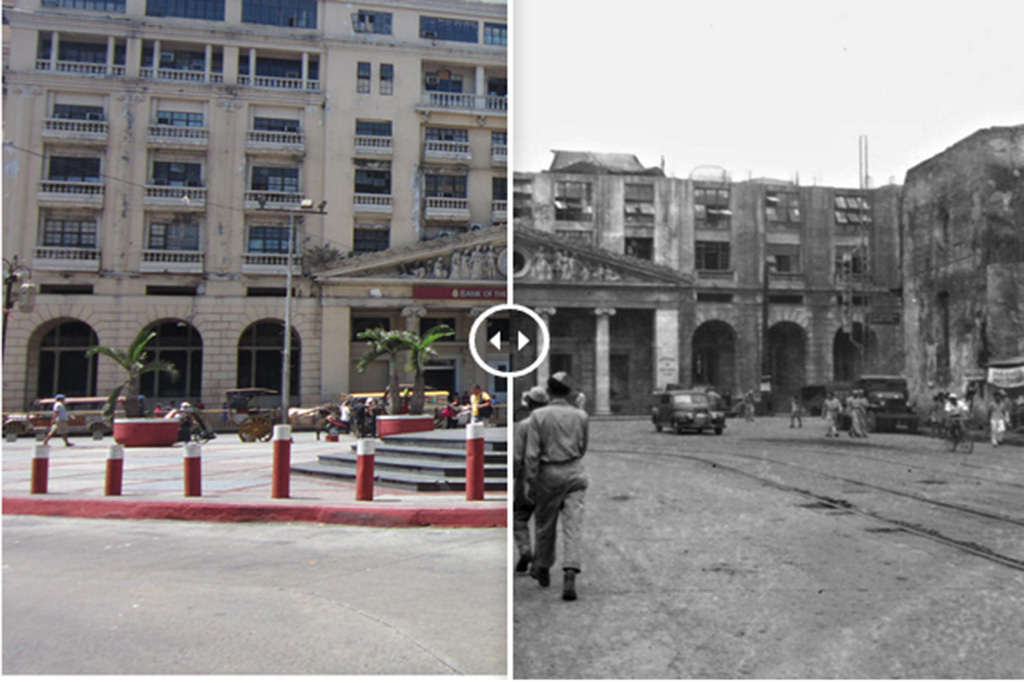 Seventy years ago, the Battle for the Liberation of Manila, more commonly known as the Battle of Manila, devastated the city in a span of one month. Over 100,000 innocent souls perished. Beautiful historic buildings, houses, bridges, and monuments were destroyed.

General Douglas MacArthur said that the Philippine capital became the most devastated city in the world, next to Warsaw, Poland. Above all, the Battle of Manila marked the end of the brutal three-year occupation of the Japanese Imperial Forces and restored American sovereignty that eventually granted independence to the Philippines.

Places around the city of Manila, which many of us are familiar with, were the silent witnesses to the atrocities of this historic battle. This bloody moment in our past was captured through old photographs of soldiers and military cars running through war-torn Manila.

Pacifiqa, in partnership with the Heritage Conservation Society-Youth, traces back to the places were these photographs were taken in 1945. Some landmarks have survived through reconstruction, while others are but a distant memory. Through these photo sliders, we hope to render a better visualization of the catastrophe of war, and how Manila has soldiered on 70 years later.

Editor’s note: All historical photos are courtesy of John Tewell. You can see more of his collection here.

RELATED: Instead of being demolished, this 1937 Binondo landmark has been restored to its old glory 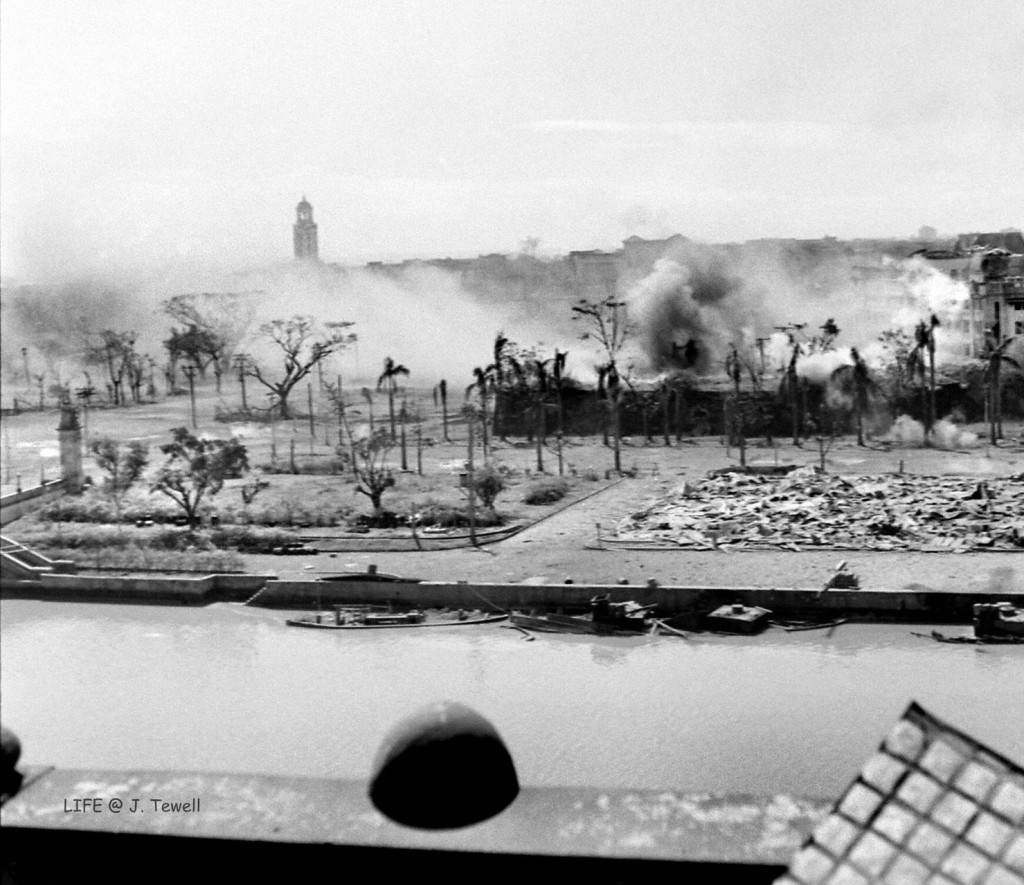 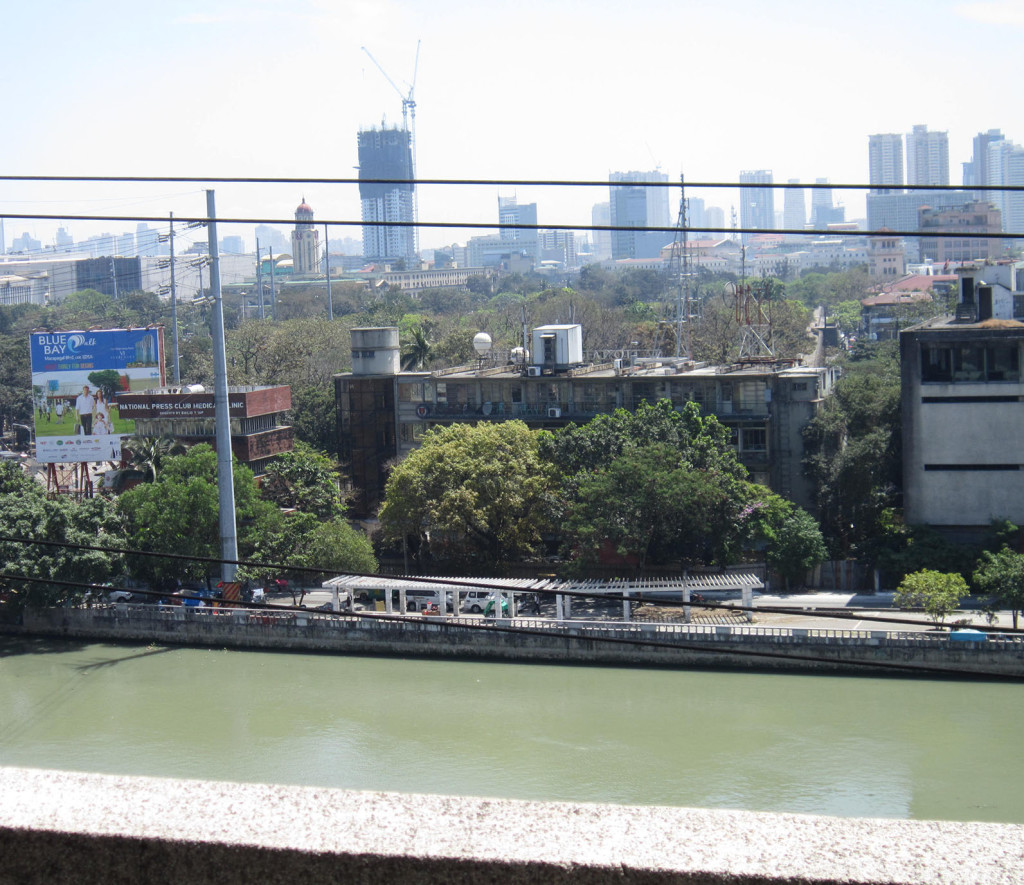 The southern section of the city of Manila during the Battle, showing the Manila City Hall clock tower. A portion of the pre-war Jones Bridge with its imposing statues can be seen on the left. Taken from the topmost floor of the First National City Bank building, now the Juan Luna Place. 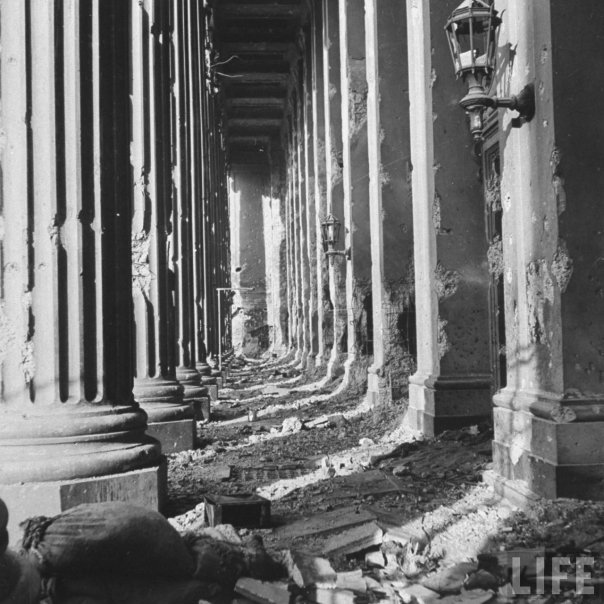 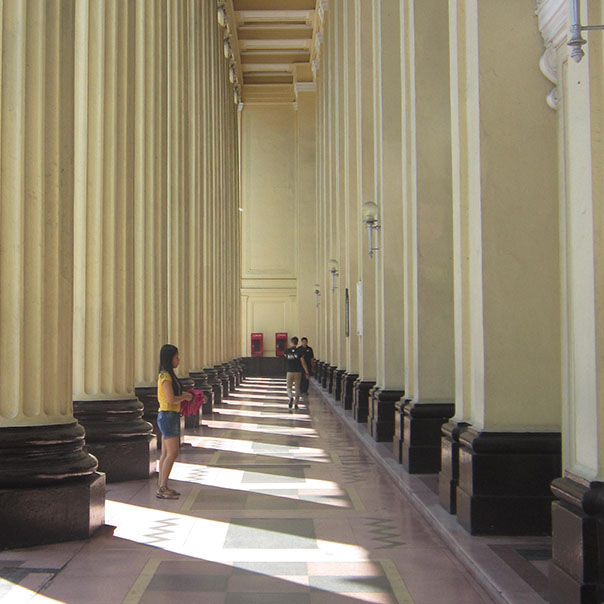 The monumental columns of the Manila Central Post Office building. 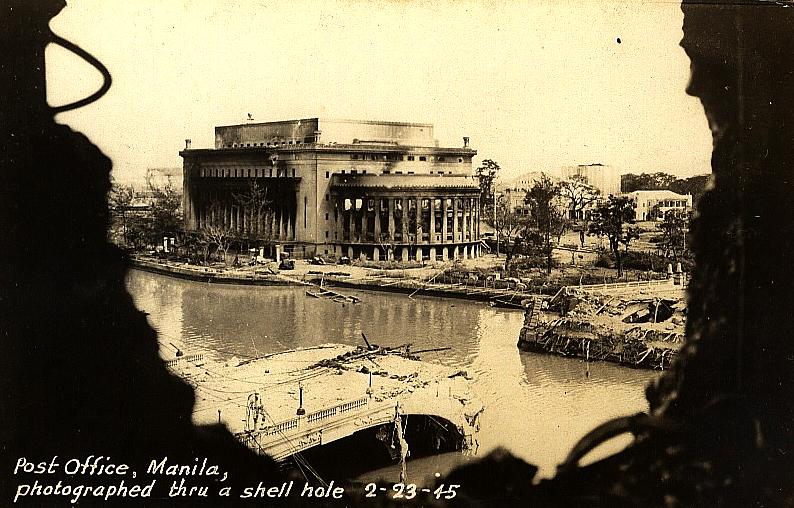 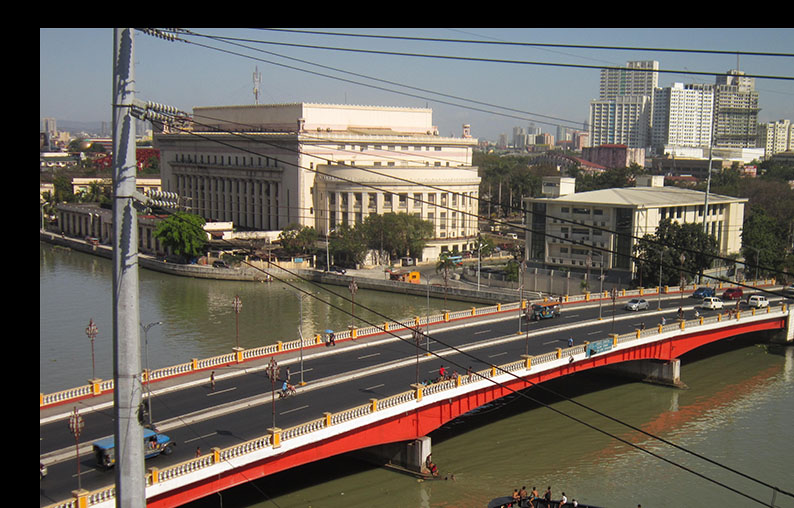 The war-torn Jones Bridge across the Pasig River and the Manila Central Post Office building, both designed by Architect Juan Arellano. The Manila Metropolitan Theatre, also by Arellano, can be seen behind the Post Office. Taken from the topmost floor of the First National City Bank building, now the Juan Luna Place. 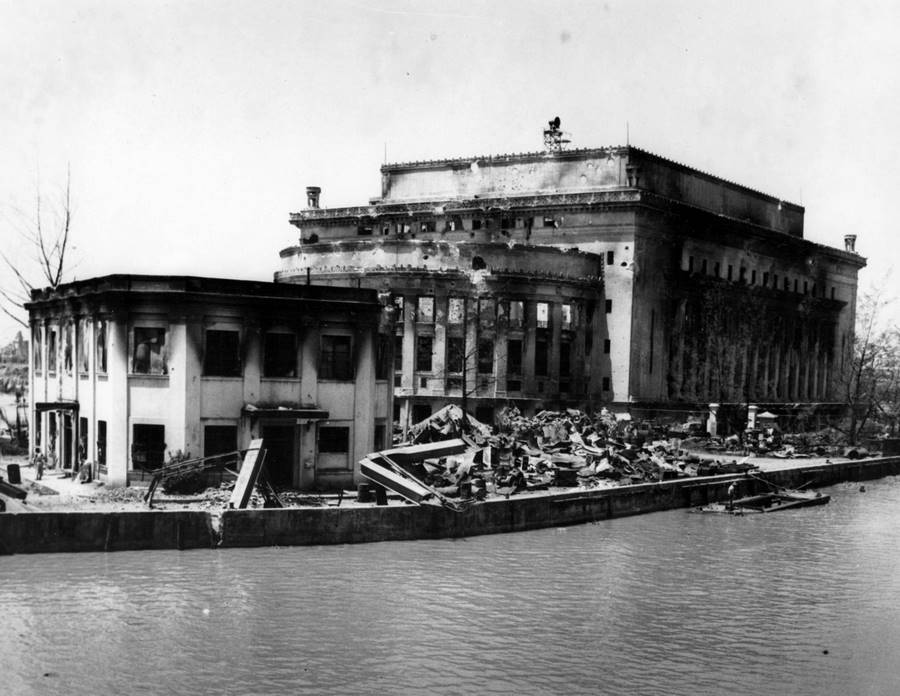 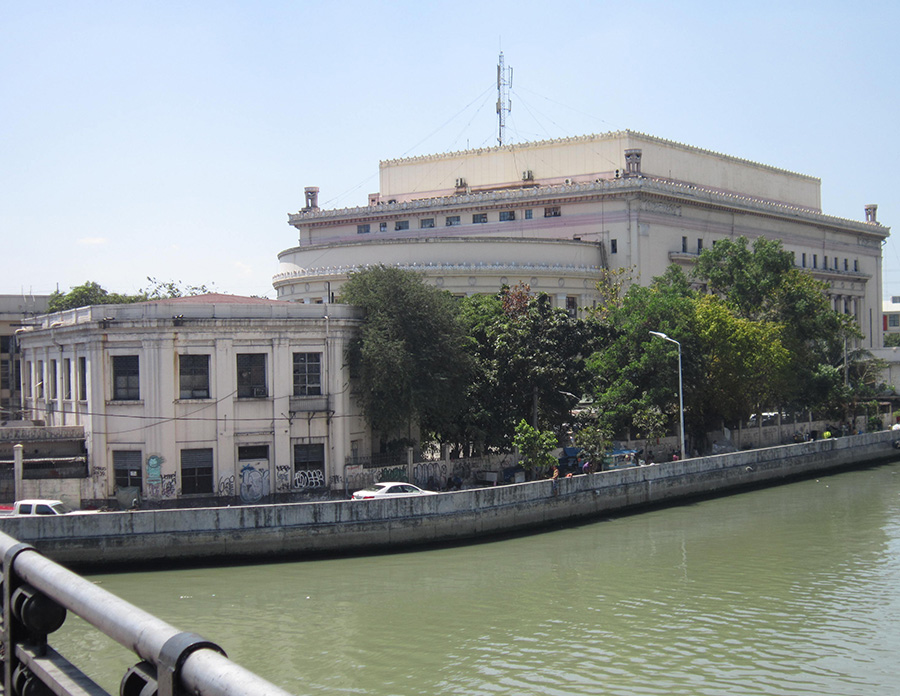 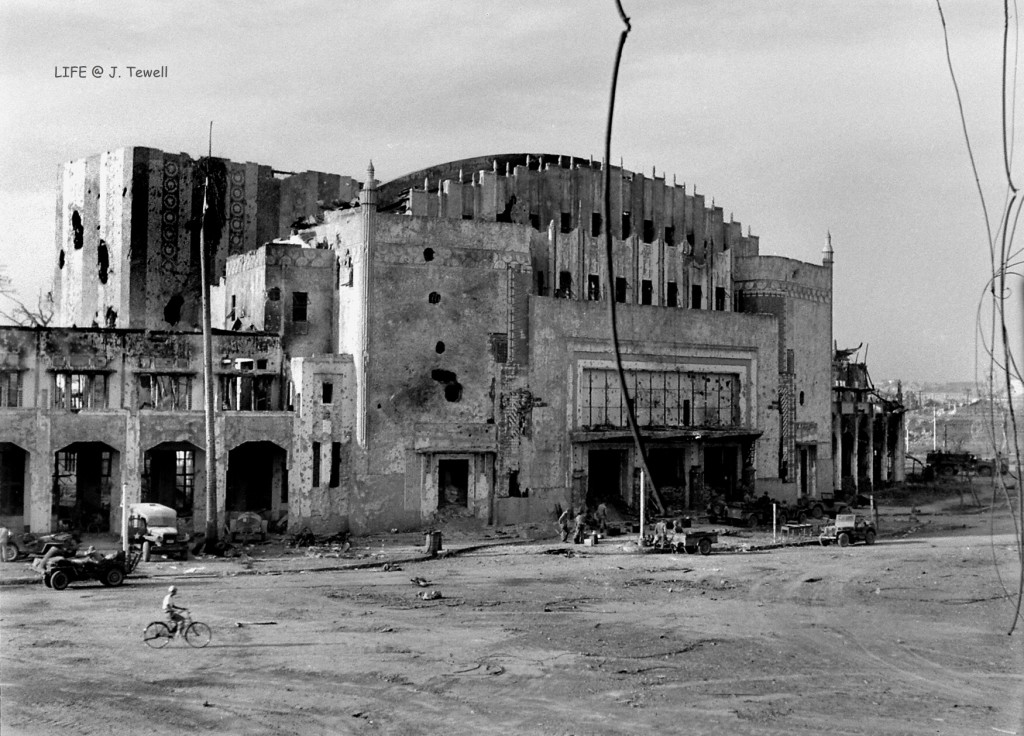 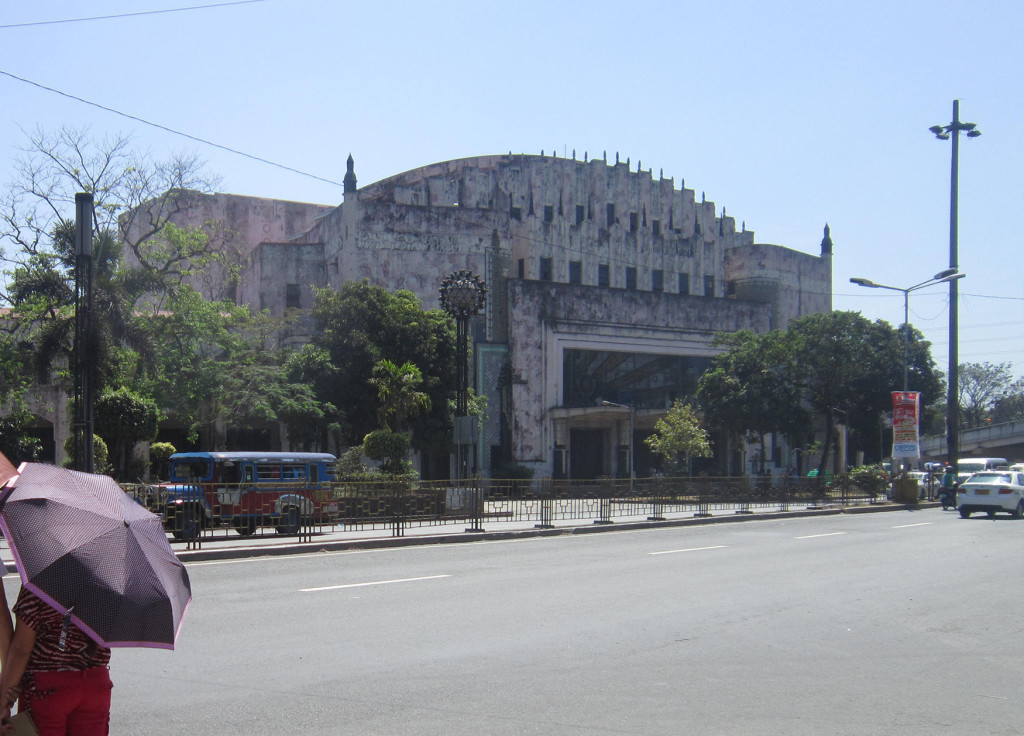 The Manila Metropolitan Theatre (MET), known as the Grand Dame of Manila’s theaters, located in Lawton, designed by Architect Juan Arellano. Taken from the former site of the old Insular Ice Plant. 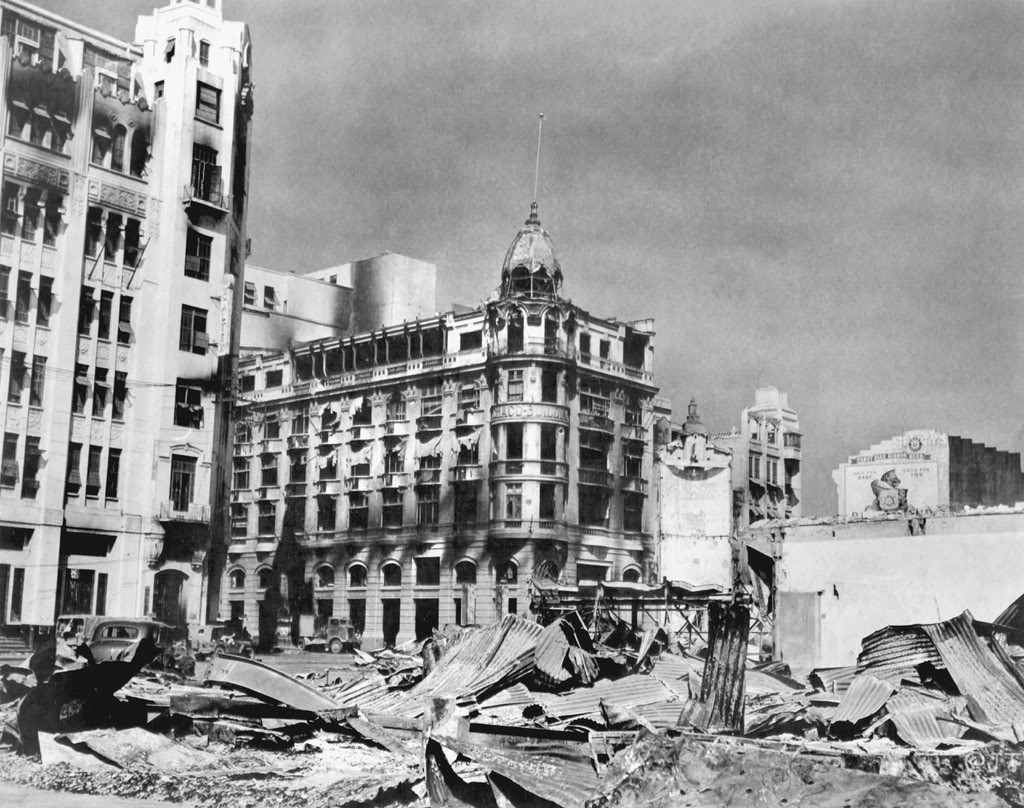 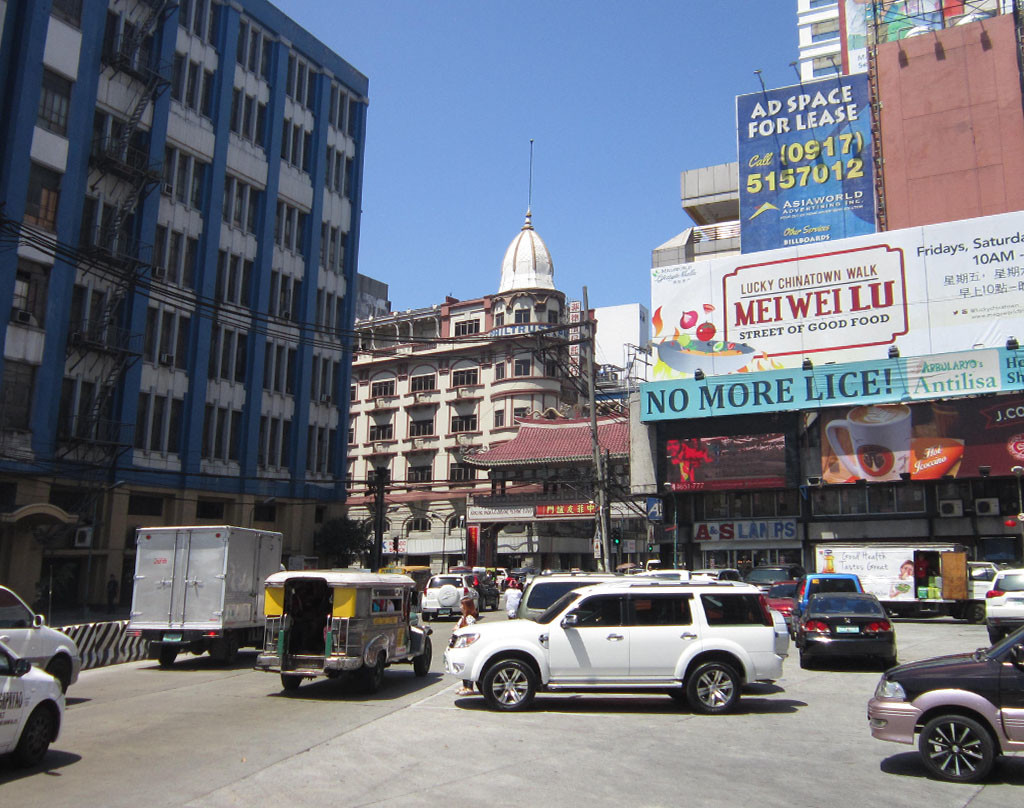 Plaza Moraga at the foot of the Jones Bridge and western end of Escolta, showing Insular Life Building, which is now occupied by the Land Management Bureau, and the Mariano Uy Chaco Building, now the Philtrust Bank Building. 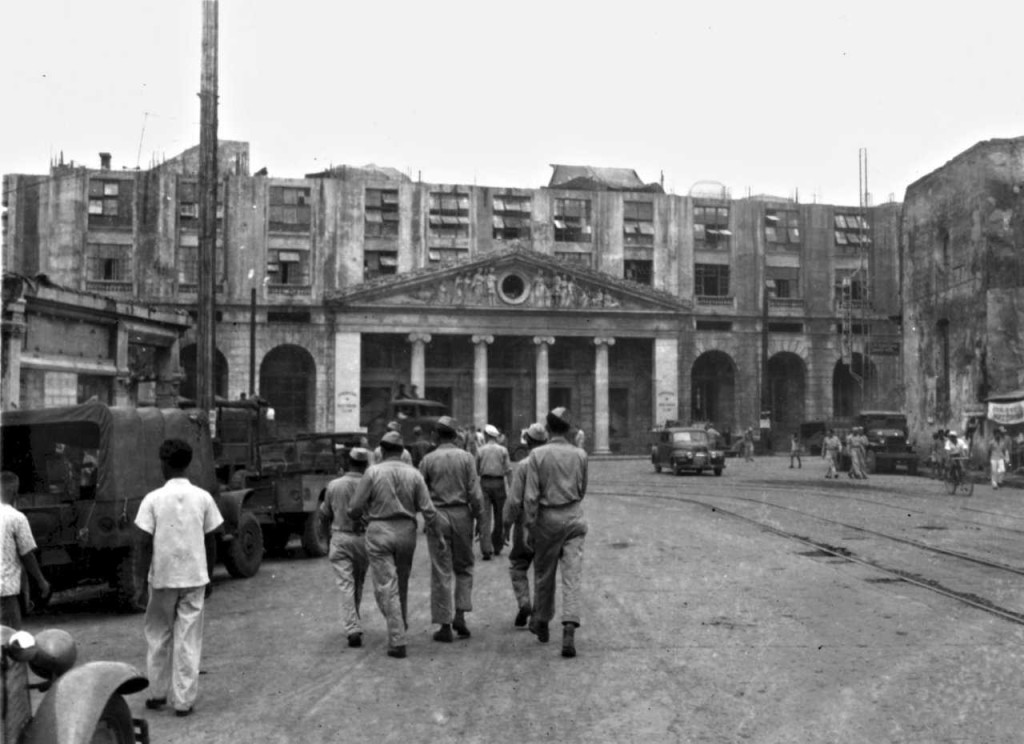 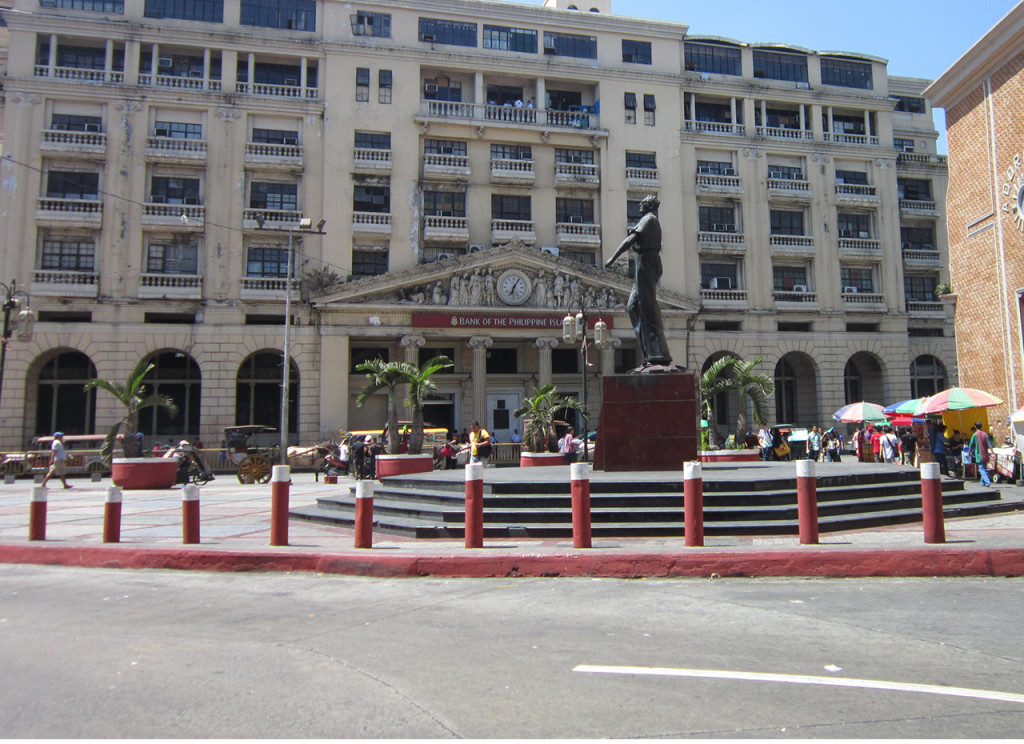 The former Monte de Piedad Building, which served as the American Red Cross hospital during the War, as seen from Plaza Goiti, now Plaza Lacson. The neoclassical building is now known as the Don Roman Santos Building. 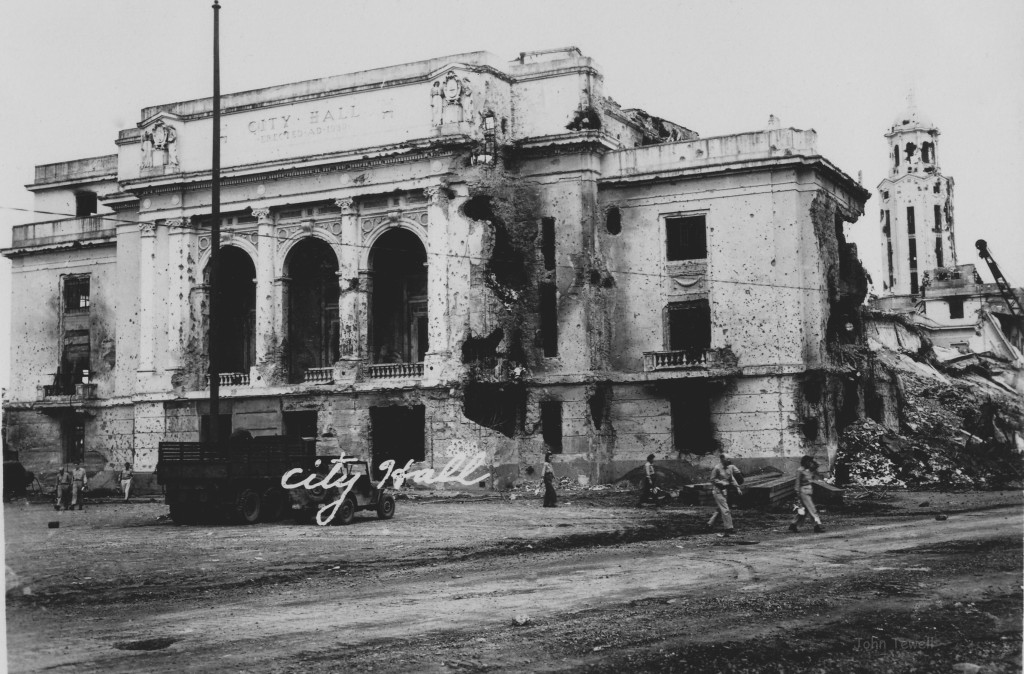 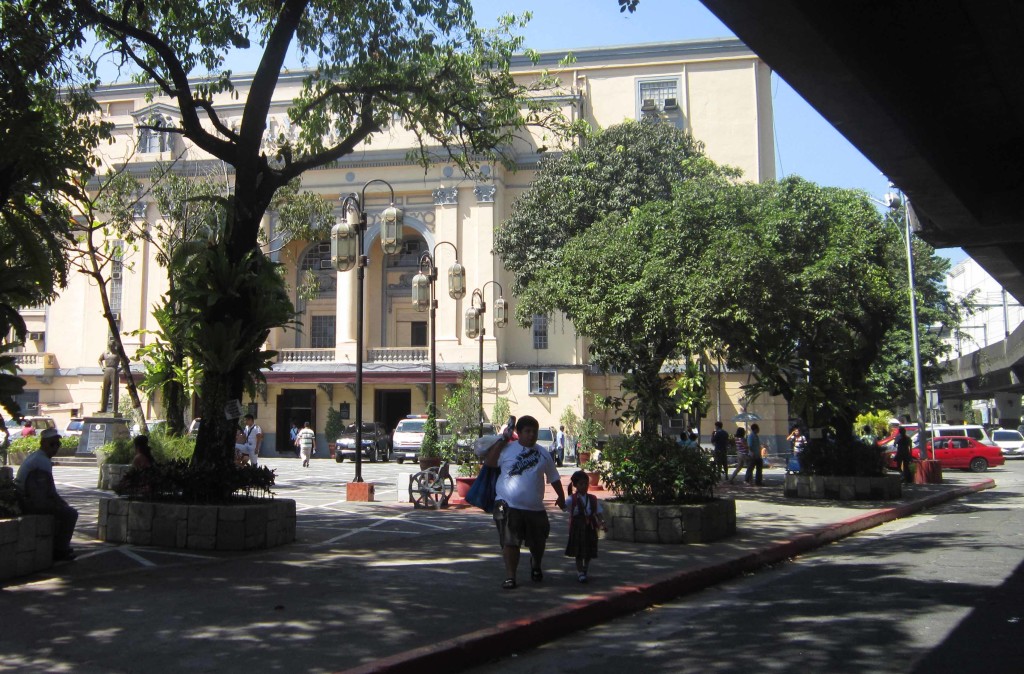 The southern entrance of the Manila City Hall and its main square. 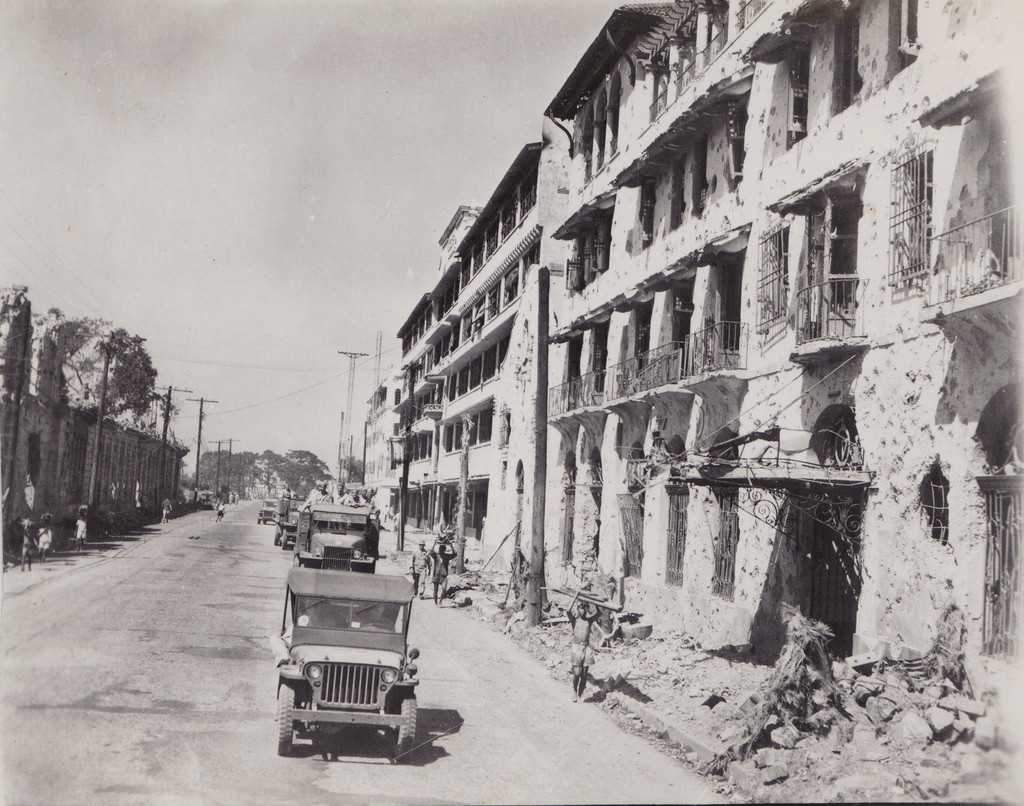 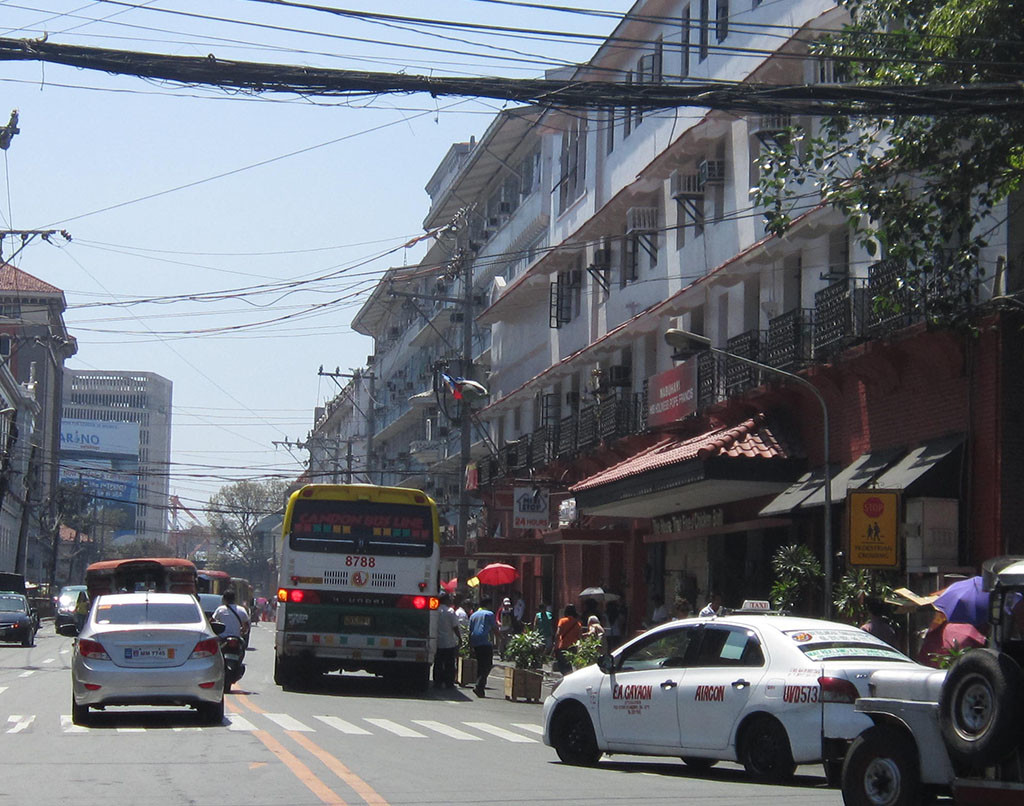 Calle Aduana, now Andres Soriano Avenue, in Intramuros. The YMCA Building (Sitio Grande Building) on the right, and the Ayuntamiento de Manila, totally destroyed in 1945 and reconstructed in 2012 as the Bureau of Treasury Building, on the left. 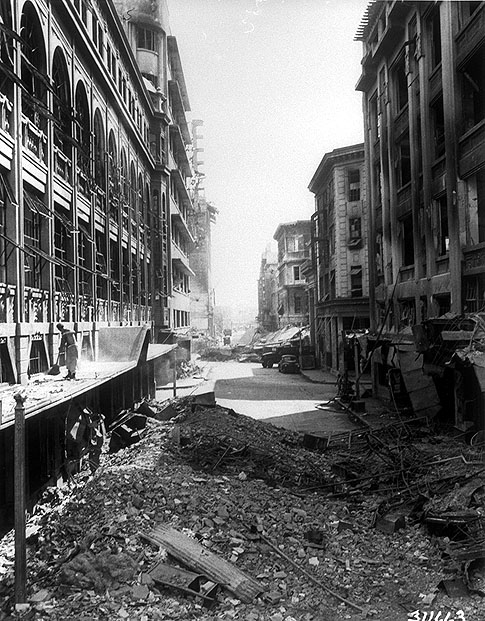 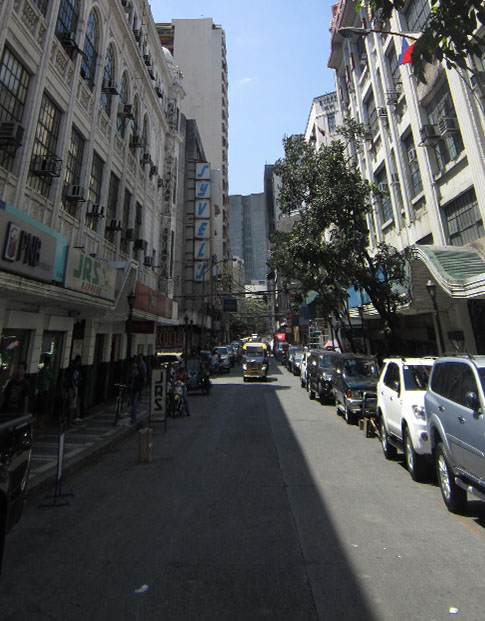 Calle Escolta, Manila’s main business street, showing the Regina Building on the left and the Perez-Samanillo Building (First United Building) on the right. 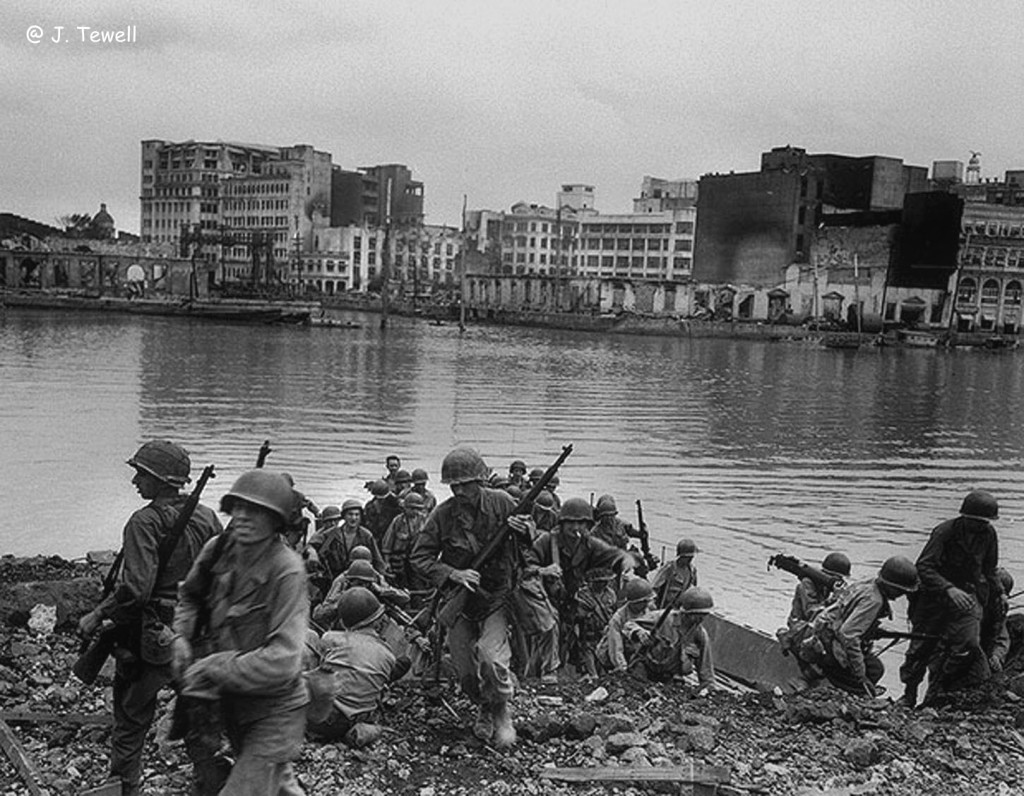 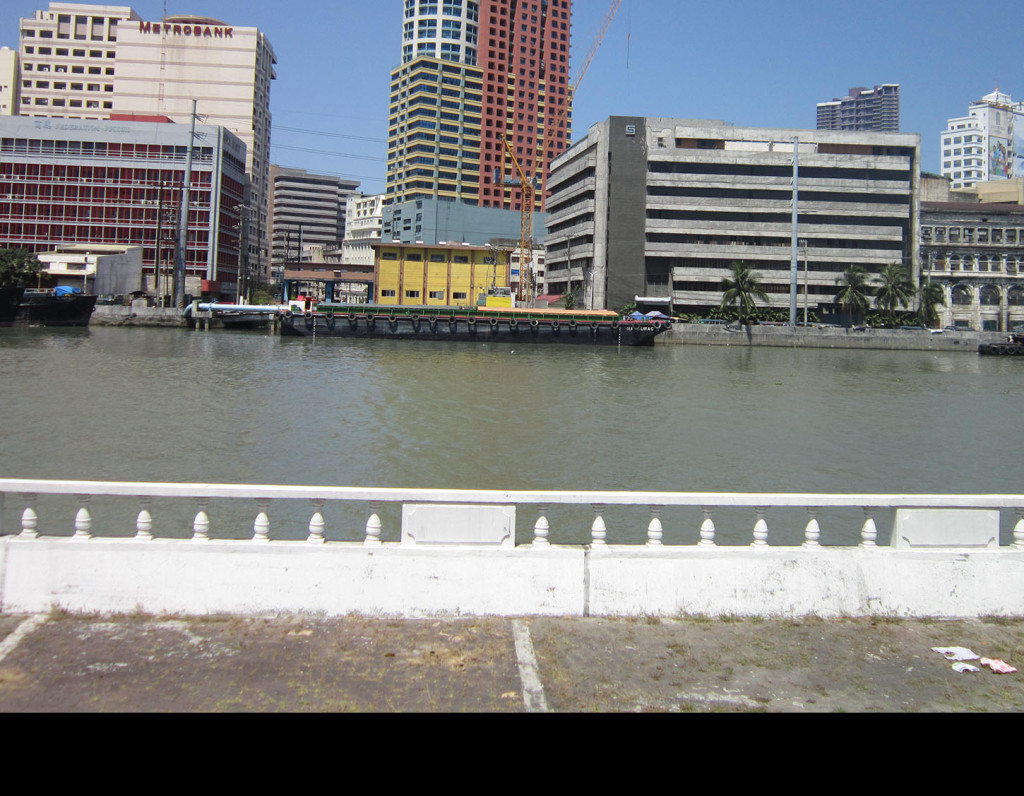 Soldiers approaching the southern bank of the Pasig River, with the northern, downtown section of the city in the background. Hinting this exact spot are the Samuel J. Wilson Building (Cobankiat Building) on the left and a portion of the El Hogar Filipino Building on the right. 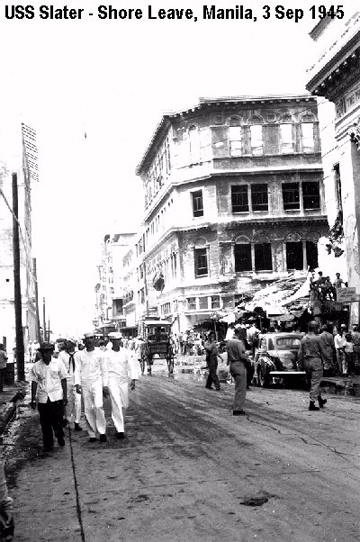 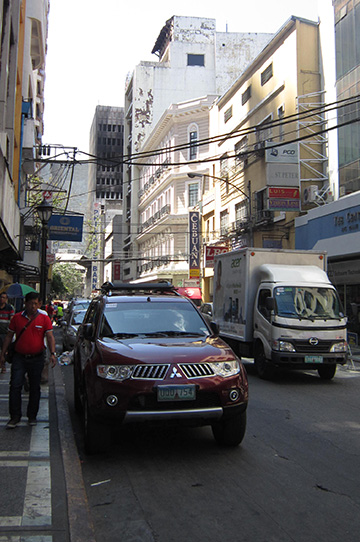 Another view of Escolta after the War, showing the Natividad Building (Teoff Center).

Stephen John Pamorada is the president of the Heritage Conservation Society-Youth and has been active in the advocacy of preservation of cultural icons in Metro Manila and the rest of the Philippines. You can reach him at [email protected] and or through Facebook.

Filipino edition: Why you shouldn’t ask the internet to edit your photos

What NBA players would look like if they were ordinary Pinoys

WTF made it to the dictionary this time

What NBA players would look like if they were ordinary Pinoys

Filipino edition: Why you shouldn’t ask the internet to edit your photos