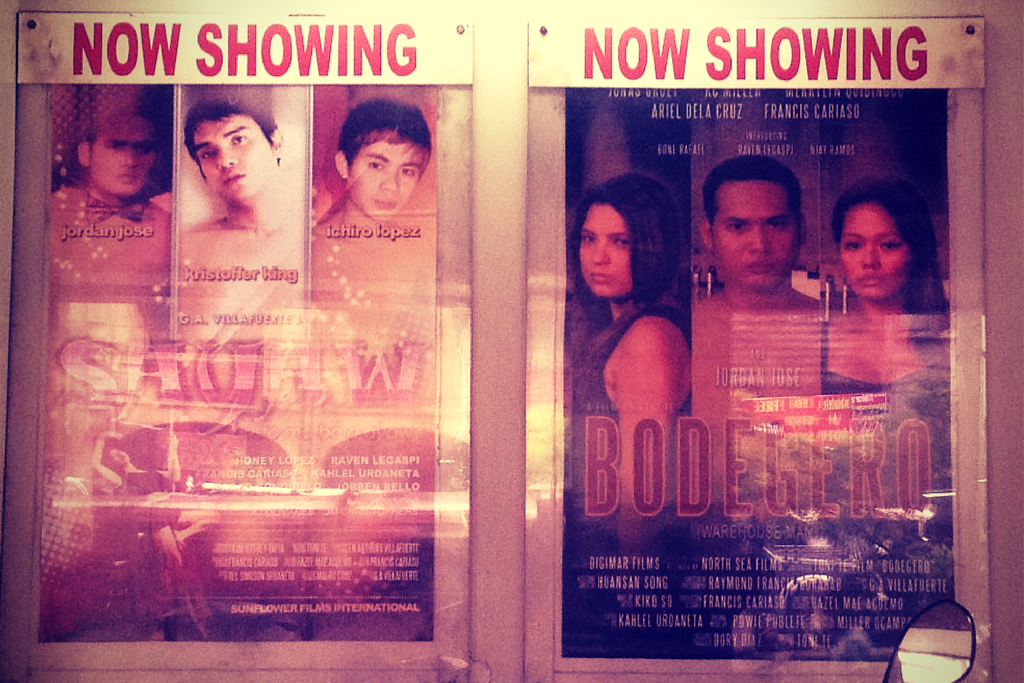 Back in the day, Manila was where you could find everything. It was Makati, Cubao, and Bonifacio Global City all rolled into one. Well-off families shopped in Escolta, where they watched movies and live performances in upscale stand-alone theaters.

There were dozens of movie theaters in Manila. Because of stiff competition, each movie theater thought of marketing tricks to attract viewers: Some hired top-notch architects to design their buildings, while others signed partnerships with Hollywood production houses.

“[The cinema houses] were also architectural landmarks, as they were designed by renowned architects of the time like Pablo Antonio, Juan Arellano, and Juan Nakpil,” said blogger Karl Aguilar, who writes extensively about Manila’s old movie theaters, in an email interview.

According to Aguilar, the downfall of Manila as a commercial hub can be attributed to various factors. “The steady decline of commercial activity in downtown Manila was exacerbated by the construction of the LRT Line 1, which ‘darkened’ the neighborhood literally and figuratively.”

There was also the rise of commercial areas like Makati and Cubao, with shopping malls that had cineplexes in them. People felt these places were safer than downtown Manila and they proved to be more convenient and comfortable than old movie theatres.

Although the ruins of some old movie houses are already gone, they remain to be an important yet missing chapter in our film history, as well as another missing puzzle piece in our country’s heritage.

“It is sad and heartbreaking that such is their fate. Unfortunately, there’s no easy answer as to how to remedy this, considering today’s economics and the state of downtown Manila,” Aguilar said.

Inside the Recto movie house

On a Tuesday night, a friend and I went to an old movie house in Recto. Out of the 50 stand-alone movie theaters in Manila, only three exist today. Yet they are some of the last places people would go to watch a movie.

These three movie theaters are just a stone’s throw away from each other. Unlike its contemporaries, the Recto cinema is still open, thanks to a hotel chain that now oversees its management.

That night, the movies being shown were Sayaw and Bodegero. But their movie offerings aren’t always like this. A week ago, the theater was showing a comedy film called My Amiga Girl.

“The cinema mostly shows second-run movies,” the security guard told me. “We also have some indie films here.”

My friend and I bought a ticket each at PHP 75. I expected people to come in and out of the cinema. But there wasn’t anyone else, aside from the bearded ticket seller and the guard I talked to.

The cinema showed no signs of ruin: The walls were painted, the staircases were sturdy, and the floors were cemented. The Recto cinema wasn’t as popular as Capitol Cinema in Escolta, but its architecture indicated that it was built during the Golden Age of Filipino films.

We climbed three flights of stairs to get to our seats. We showed our tickets to a girl who was watching over a stall that sold junk food and instant noodles. In front of her was the entrance, where two men smoked cigarettes.

We caught the last few parts of Sayaw. A man and a woman kissed passionately onscreen as we looked for seats. It was noticeably much darker inside, compared to cinemas inside malls.

Around 10 people were inside the theater. There were many vacant seats, but some men chose to stand beside the entrance. Others stood behind the last row of seats.

My friend and I sat in the middle row, along the aisle. There was no other female in sight.

While doing research on Manila’s old movie theaters, I learned about underground “side trips” and “cruising.” The word “gimik” is commonly used among guys who offer a certain kind of service, which is when men pickup men to perform sexual acts for them at a price. Tripping is done in old movie theaters, as portrayed by the 2008 Brillante Mendoza film Serbis. I also found a detailed list of places where cruising happens: in fast food chain toilets, in malls, and—surprise, surprise—in MRT and LRT coaches.

One of my contacts introduced me to Paul, not his real name, and he told me about how “gimik” works. 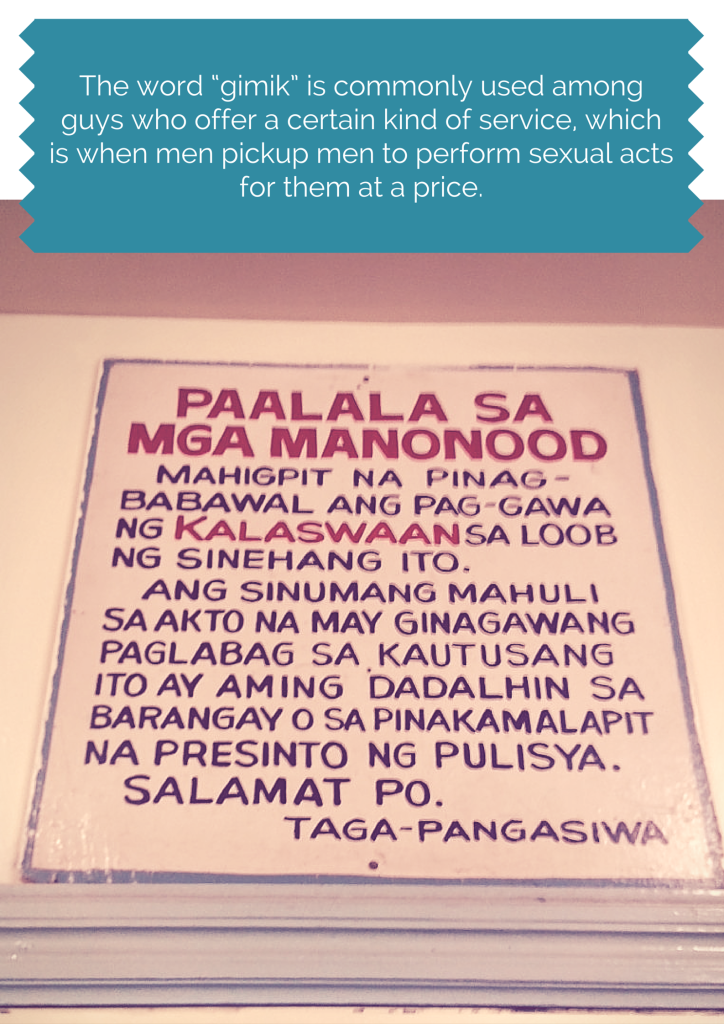 “Nung una, napasama lang ako sa tropa, di ko talaga ‘yon ginagawa. Tamang gimik lang, pampalipas oras,” Paul said. (At first, my buddies just invited me to go with them. I really didn’t do this kind of thing. But I eventually did it, just to kill boredom.)

I asked him how he meets his clients.

“Simple lang, kapag trip ka nila, kung hindi kakalabitin ka, lalapitan ka niyan. Pero yung iba nahihiya, kaya minsan nilalagkitan ko tingin ko at sesenysan ko.” (It’s simple. If they want you, they’ll approach you and nudge you. But some of them are shy, so I’ll just look at them suggestively and signal them to follow me.)

Paul said that men can simply book him through a text.

“How much do you usually get when you’re tripping?” I asked. 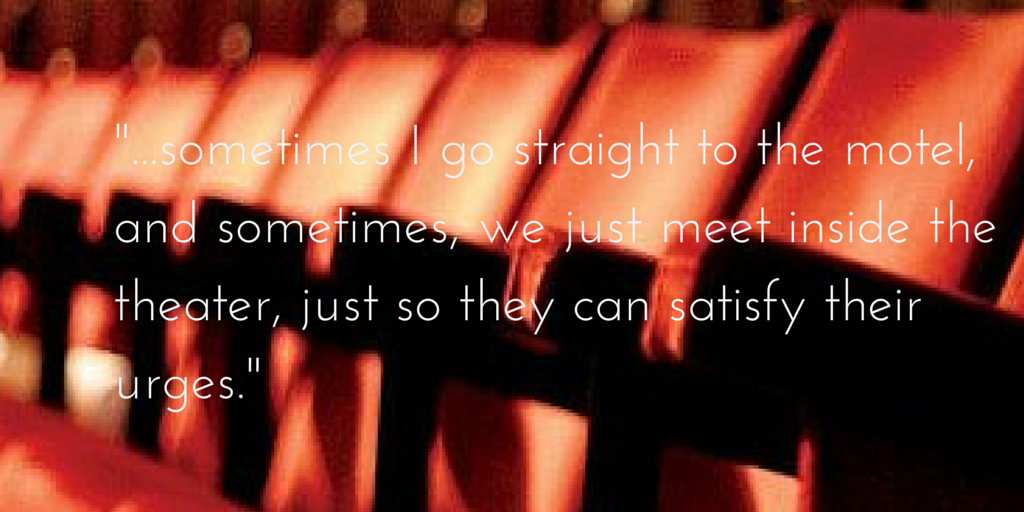 The men he meets come from all walks of life and hail from different professions.

Does he approach the men? Or do people in the theater already know what he’s offering?

According to Paul, how much he gets paid affects the quality of his service.

“Pag payat ang biyaya, walang titihaya!” Paul said, laughing. (If the pay is meager, no one gets laid!)

Paul said he doesn’t know if he will continue tripping in the future.

Paul is aware of the consequences of tripping, particularly sexually transmitted diseases like HIV. However, tripping is still easy money.

My friend urged me to explore the cinema, but I was uneasy; scared for him and for myself.

The movie ended as soon as I took one of the seats directly below the orchestra. There were two men sitting on the row in front of me. While waiting for the next movie, 80s love songs filled the cinema. Nobody left the theater. People just walked around, transferred seats, and went to the washroom.

The rightmost area of the theater was the men’s toilet, and that was it. There wasn’t a room for women.

My friend went inside the washroom to see what it was like inside.

There were now at least 15 men inside the theater. They looked as if they just came from work. A significant number looked like bouncers from a bar or gangsters in old action films.

Around five men were inside the restroom, and they all looked at my friend when he came in. They tried to catch his eye, but he avoided making eye contact with them. 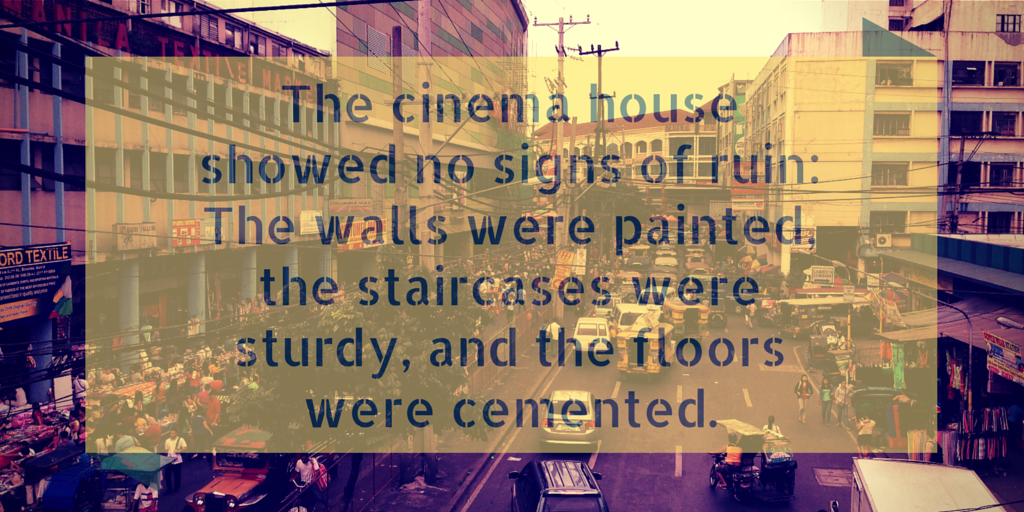 I was growing paranoid. The things I knew about the place kept me from talking to the men in the theater.

The second movie began with a sex scene between a man and a woman. My friend went to the back of the cinema, where three men stood.

A man stood beside him, looking over his shoulder as he fiddled with his phone. But the man didn’t say anything.

When my friend came back, he said, “Tinitingnan niya ata ako.”

It was 9 p.m. and I wanted to leave: The movie didn’t make any sense, and being surrounded by all those men made me uneasy.

Another side of Manila

We stepped out of the theater at exactly 9:15. The girl at the food stall wasn’t there anymore, and surprisingly, the cinema was about to close.

My friend urged me to visit another theater. We checked out the two other cinemas in the area. One was preparing to close as well; the other cinema no longer sold tickets.

I have long been curious about these kinds of places, and going to the Recto movie theater has opened my eyes to another side of Manila.

People often forget that these theaters were stars that were once the main attractions along the streets of Avenida and Recto. They flaunted their tantalizing façades and held the brightest shows during their prime, before industrial progress came and snatched away the original meaning of cinematic and architectural wonder.

Visiting one of them has left me more questions with answers I’d rather not know.