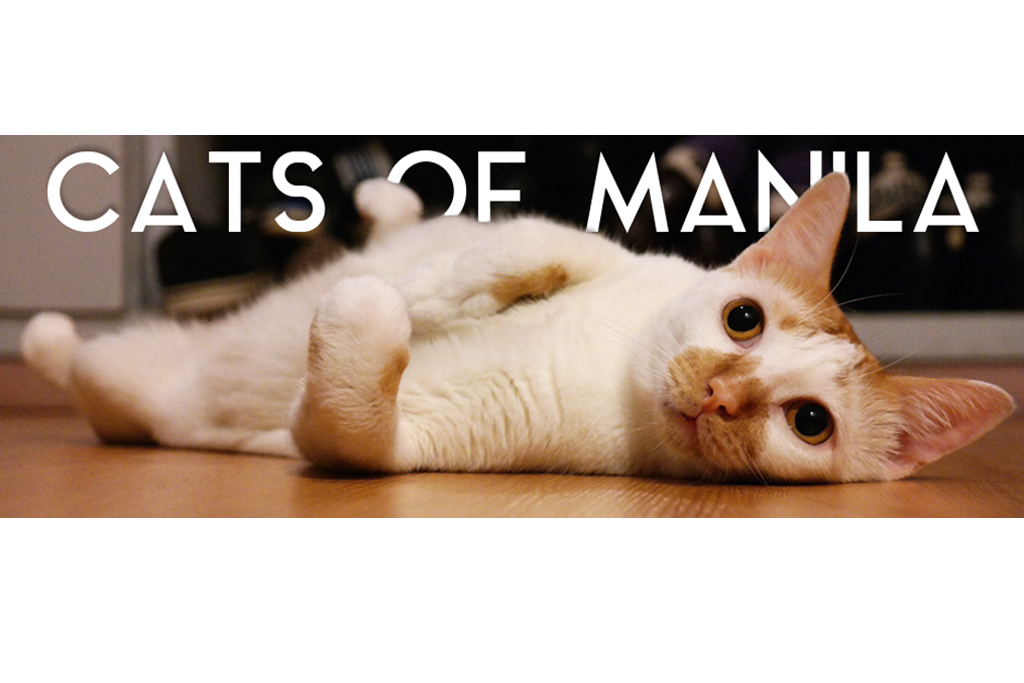 Among all the Humans of New York clones that have been popping up in the Philippines, there is nothing quite like Cats of Manila (CoM).

“Manila, one really deep cat story at a time. Inspired by the millions of people cloning Humans of New York,” reads its Facebook description. Instead of people sharing their quirky, tragic, or existential stories, CoM is full of funny, finicky, and philosophical felines.

The page pokes fun at HoNY copycats through its wittily captioned cat images, but it also churns out posts that are timely and relevant. With already 16,000 likes since its creation in July, CoM is rapidly becoming an internet phenomenon.

CoM has captured the perfect the formula for internet stardom: cats, the internet’s most loved animal, combined with a light-hearted take on Brandon Stanton’s visual project.

Despite its success, the geniuses behind CoM wish to remain anonymous. Pacifiqa talked to its creators about their creative process, their new animal adoption feature, and their future plans for Cats of Manila. 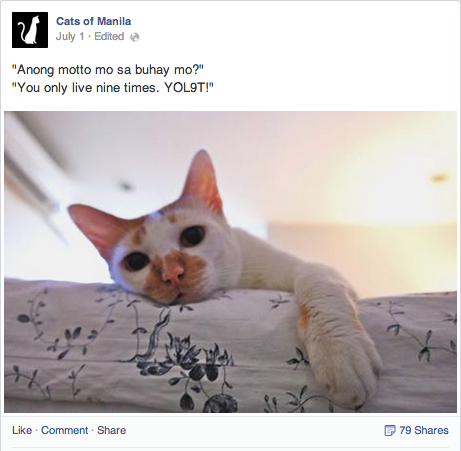 The animal kingdom is huge. So why cats?

Admin 1: Cats are great. Some even say “The internet is made of cats.” They are featured in memes, photos, videos, GIFs, and many more. Almost every blog or social networking site that you visit has some tribute to cats. They are adorable, cute, cunning, wise, clumsy, wild…the list goes on. Basically every aspect of the feline character is 100% pure entertainment material. So why cats? Because…cats.

Admin 2: I’d say Cat’s of Manila wasn’t really inspired by HONY. It’s more like CoM was inspired by the copycats who try to imitate HONY’s style by making everything super-dramatic and philosophical. We figured we could make fun of them by making the silliest clone out on the Internet. 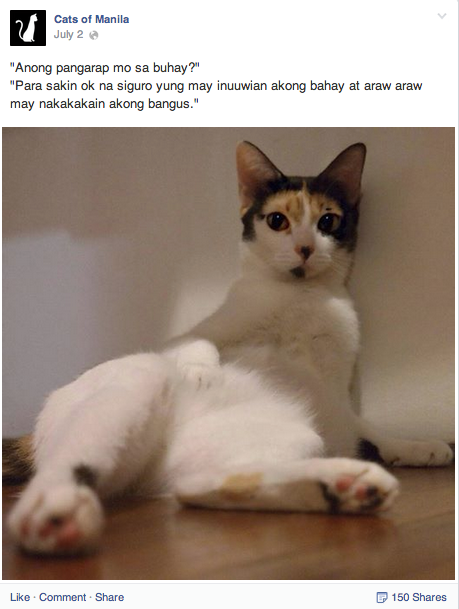 Why do you wish to remain anonymous? Will revealing your identities affect the project somehow?

Admin 2: Not really. We just think it’s not really important for people to know who runs the page. They come for the stupid stuff we post and the adorable kitties, not the folks behind them. Plus, fame makes you say really stupid shit. Ask Kris Aquino.

Can you give your subscribers a hint about the genius(es) behind Cats of Manila? Is this a solo project or a group effort? Students or working stiffs?

Admin 1: Here is a photo of our complete staff. (featured on CATGIFS.org) 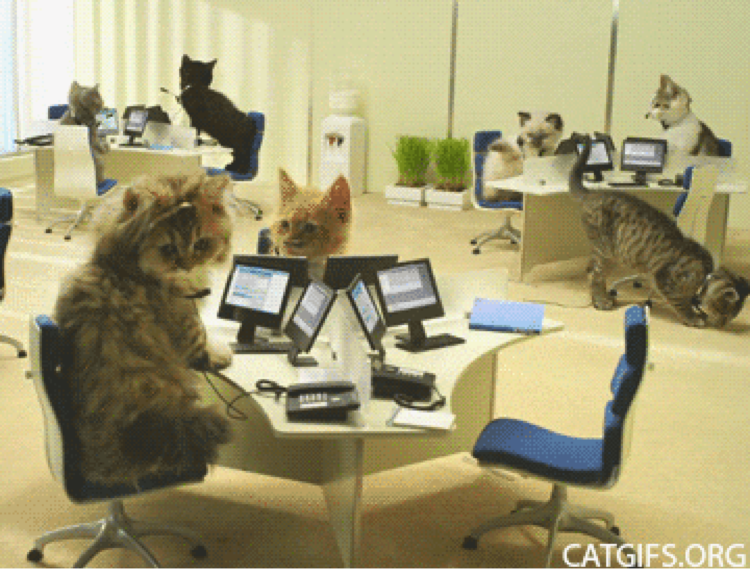 Are you cat owners?

Admin 1: Yes, indeed. I own three wonderful cats. Sometimes six when I babysit for my brother.

Admin 2: I own a dog actually. Cats are super cute though and I’d definitely own one if my mother isn’t allergic to them.

You started Cats of Manila on July 1, 2014. The month hasn’t even ended yet but you already have 16,000 likes on Facebook. Did you expect the page to become popular so fast?

Admin 2: Nope! We were surprised the page even got to a thousand likes. There was a point where I’d literally refresh the page and the like counter would jump one hundred more. It’s ridiculous.

What was your original intention for creating CoM? Is it just to satirize HoNY clones or HoNY itself?

Admin 2: Mainly HoNY clones. It’s like every week a new one’s popping up and they’re basically offering something mediocre compared to Human’s of New York. We did Cats of Manila just to pretty much poke fun at the idea. If we’re going to be another stupid HoNY clone, at least we can be self-aware about it!

Let’s talk about the content. Where do you source the pictures that appear on CoM?

Admin 1: In the beginning, we used our own personal content. Photos from my own personal collection over the years. Eventually, our fans began sending in their own photos of their pets or cats they’ve spotted on the streets of Manila, begging to be featured on our page. The number of photos we receive each day is incredible! Our inbox is flooded with some of the most unexpected photos of cats.

Admin 2: We mostly enjoy just looking at the messages and interacting with these cat lovers. 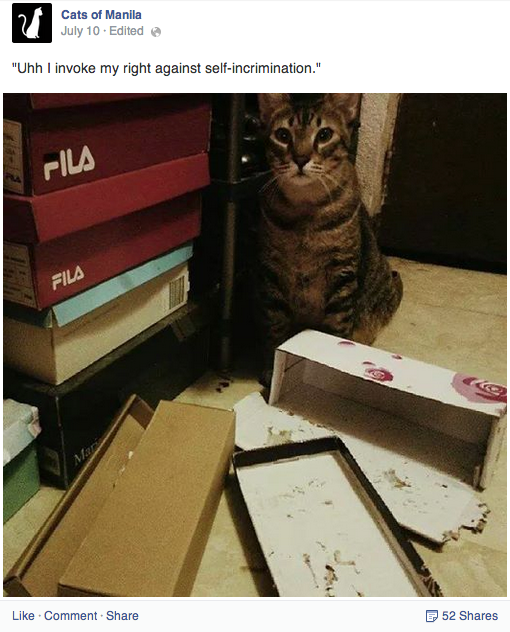 Do you really receive letters/requests from Facebook users? If yes, how many messages do you get per day?

The captions are very clever and the posts get thousands of likes. In your opinion, what do Pinoys find humorous? Have you figured out what makes them tick? And do you think you’d ever run out of cat puns?

Admin 2: Pinoys in general are pretty much easy to entertain. It’s probably because we’re so light-hearted in nature. It also helps that Filipino is a hysterical language.

How do you choose which pictures to post? It’s interesting that CoM manages to keep up with current issues. You posted something about Typhoon Glenda, the new tuition scheme at UP, and the recent fraternity hazing controversy. Has it always been your plan to provide social commentary on your posts?

Admin 2: Yeah actually. People can relate more if you talk about things happening right now. Of course, we try not to be preachy about it and we keep the topical posts at a minimum. 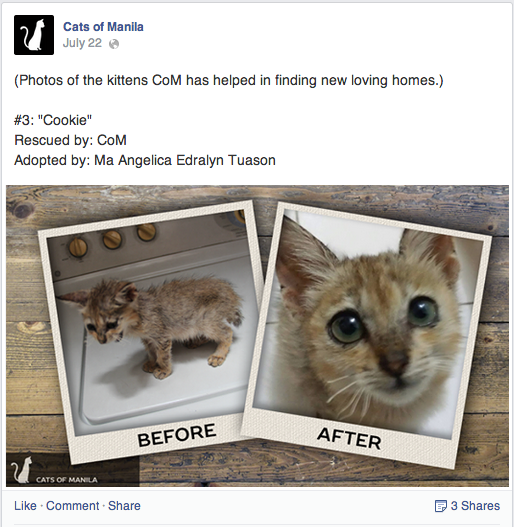 Recently, you have been posting pictures of cats that are up for adoption. How did this come about? Do you plan to make cat adoption a permanent feature of CoM?

Admin 1: In our earlier posts, we featured a cat that needed immediate medical attention. We were surprised to see our subscribers communicating with one another in the comments section—tagging people within the vicinity of the cat and giving directions to a nearby animal hospital—and eventually the cat was brought in by a good Samaritan who was also able to collect funds from other commentors.

We realized the online community we’ve created has a soft spot for the well-being of these cats and we decided to put that to good use. CoM adoptions will be a permanent feature. Currently, we are collating a long list of people who have inquired about adoption. Before any adoption takes place, a formal screening process is done to see if these people are eligible to take in any of our rescues.

What are your future plans for CoM? What else do you have in store for your fans?

Admin 1: You’ll just have to wait and see!