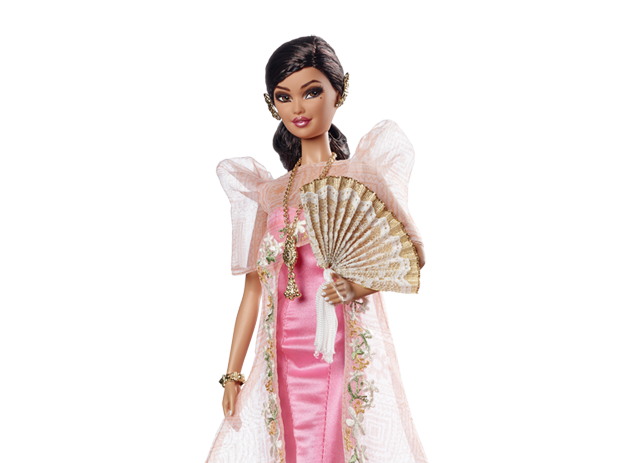 With her iconic blonde hair and slender figure, Barbie is a prominent figure in pop culture and in millions of young people’s childhoods.

In the past years, Barbie-creator Mattel has been producing racially diverse dolls to accommodate its global reach. This year, the brand’s “Global Glamour Collection” launched a Filipina Barbie named Mutya.

Mutya is Filipino-American designer Carlyle Nuera’s debut-doll for Mattel. He has long been dreaming of working with Barbie since he got his first Ken doll in 1991.

“From that day onward, Carlyle pursued his doll design dreams. Nearly 20 years later, he reached a high point when Mattel hired him to design dolls and fashions in 2010,” a press release from the Barbie’s official website said.

The Mutya Barbie dons the classic organza terno, which “references textiles of the different tribes in the Philippines as well as the sun icon from the flag,” Nuera said. “The embroidery on the hem is inspired by the Philippines national flower, the sampaguita. The details of Mutya Barbie’s jewelry refer back to tambourine jewelry as well.”

The Mutya Barbie can be purchased from their official website for US$100. Only 4,400 dolls will be produced.

But Mutya isn’t the first Pinay Barbie doll. Back in the 90s, Mattel partnered with Richwell Trading Corporation to create dolls dressed in different traditional costumes. In 2012, the Philippines Barbie was officially released as part of the “Dolls of the World” collection.

With the popularity of gadgets and the internet, fewer and fewer children are playing with actual, physical toys, and Mattel seems to feel the effects of the digital shift.

According to a report from Fortune, the US-based toy company is set to release 78 new dolls by the end of the year.

The company saw a decline in sales in the past three years, as Disney’s Elsa dolls shot to popularity.

“The diverse range is perhaps a sign of the changing times…Diversity among American children is far greater than the population as a whole, so Mattel is making a more aggressive move to address the changing demographics of the main market it serves.”

Forget the film, #MNL50ShadesOfGrey is a lot more entertaining

How a simple travel planner unexpectedly launched a community of wanderers

‘Fifty Shades of Grey’ is a boring chick flick

Today in crazy fashion news: The Dress that Destroyed Friendships and the Energy-Saving Wankband

Who said summer workshops are just for kids?

People are throwing a b*tch fit over EDSA 29 traffic