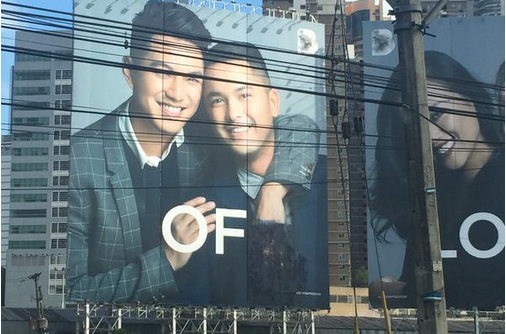 After reaching out to representatives of Bench, Ad Manager Jojo Liamzon confirmed that the decision to cover portions of the billboard was done by the Ad Standards Council.

“There’s a process to how a billboard gets approved,” said Liamzon. “From the beginning, we were advised not to include the element of holding hands in the actual billboard.”

Indeed, from reviewing tweets from previous days, it appears that the billboard has always had the hands covered, contrary to our earlier report and social media comments that it was done Friday morning. 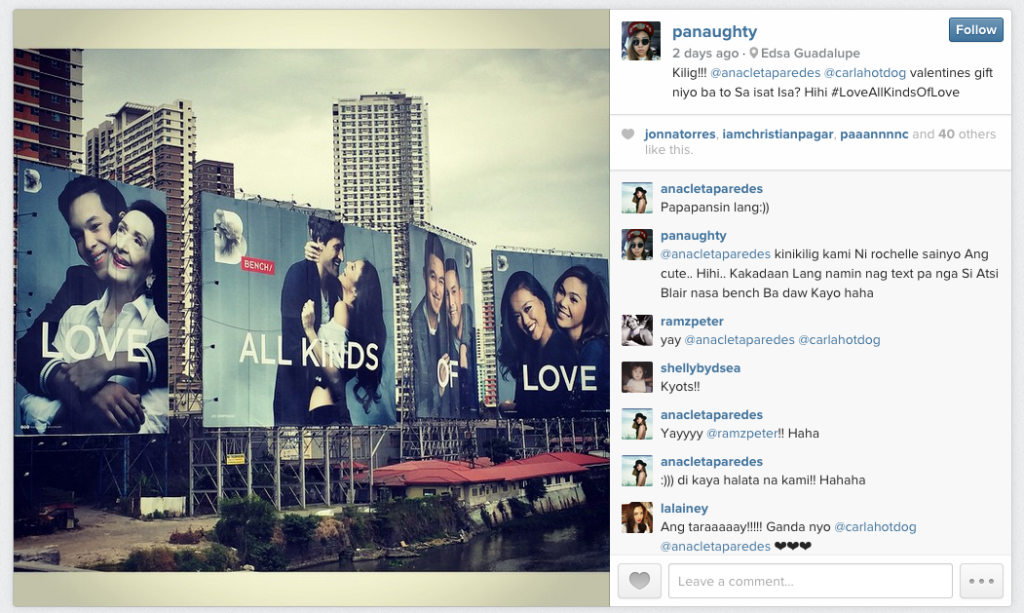 Bench’s new “Love All Kinds of Love” billboard campaign along Guadalupe has received positive reviews. Local news site Coconuts Manila described the campaign as progressive, and commended how “the metropolis is finally back in the modern times.”

It’s also a wise PR tactic, considering the “Naked Truth” controversy last year. Bench was criticized for being sexist: parts of the show were seen as offensive to women.

, the billboard featuring real-life couple Vince Uy and Nino Gaddie has been censored. The two men are holding hands in the original photo, but now their hands have been covered in black paint.

A source that was involved in the campaign, but not authorized to speak on the matter, relayed that the it wasn’t Bench’s decision to censor part of the image.

“The governing body took issue at some of the campaign’s contents, citing traditional family values,” the source said.

The source added that Bench decided to proceed with the campaign, despite having to cover-up certain elements, because “the most important thing is for the ads to go up and still send the message.”

It was not immediately clear which governing body the source referred to. Bench could not be immediately reached for an official statement. The story will be updated once a statement from Bench is available.

Vince Uy, one of the two men photographed in the campaign, had this to say, in an interview with Scout Magazine:

Personally, I feel that it’s unfortunate that our hands had to be covered. We feel that the positive reception to the campaign shows that Filipinos are more open-minded and progressive than we’re given credit for. On the brightside, we are still happy and thankful because, holding hands or not, Bench still gave the opportunity to spread the message of acceptance, tolerance and equality of any kind of love—perhaps slowly, but definitely surely.”

An earlier interview with Stylebible revealed that the original idea for the billboard was to have a gay couple kissing. That idea, while approved by Bench founder Ben Chan, was not approved by the Ad Standards Council, also citing traditional Filipino family values.

Those concerned about the censorship have started the #PaintTheirHandsBack petition on social media.

In the Philippines, it seems that loving all kinds of love remains an unwelcome idea.