by Jed Rosell and Ryan Panlilio

For the tired and weary workers, the over-caffeinated young professionals who work too much but definitely don’t get paid enough, there are perhaps no two words in the English language that are as powerful as LONG WEEKEND!

For some it’s in the sheer beauty of having 72 hours to not give a damn about your inbox, or the incredible satisfaction of snoozing your alarm ’til lunch. Whatever it is, a LONG WEEKEND is simply magical.

Reality may give you an extra strong slap in the face once you actually go back to work. But for those 72 hours, you are free.

With 13(!) long weekends on deck for 2015, there is simply no excuse to not get away. You might be unable to plan an outing for every single weekend, and that’s okay. Some days, there is simply no substitute for doing absolutely nothing. But for weekends when you feel adventurous, here’s a handy guide on where to spend that well-deserved freedom.

As founders of Biyahe Lokal, long weekends are also a busy time for us. We organize more trips for families, barkadas, and even office outings. In our years of planning trips, we’ve come to know the places to avoid, and the hidden gems that can still be enjoyed, even with larger crowds. If we had to plan a trip for you, here are the 13 beaches we’d recommend:

RELATED: Go to 9 beaches near Manila on a tight budget

The popular beaches of Saud and Blue Lagoon can get packed on long weekends. If you prefer privacy, a laidback environment, and authentic Ilokano dishes, then Kingfisher Beach will definitely suit your standards. The intense winds sweeping the white sand shores of Kingfisher have made it a world-renowned spot for kitesurfing.

Three hours from Aurora’s surf mecca Baler is the remote beach of Casapsapsan. The arduous roads and rough terrains leading to the town of Casiguran makes traveling to Casapsapan a burden. But the few people who journey here will definitely say that Casapsapan’s white sand beach is worth the long haul.

Reality TV show “Survivor” placed Palaui Island on tourism charts after it aired. Since then, outdoor enthusiasts, tourists, and travelers have been visiting the island for its virgin rainforest, stunning views, a Spanish-era lighthouse, and of course, the beach. Palaui has everything packed in one island.

Aside from Cagbalete’s famous white beach, the island, which is just 45 minutes off Mauban’s coast, has a spectacular sandbar that stretches over a kilometer. The three-hour drive from Manila to Mauban makes Cagbalete Island easily accessible to travelers looking for a quick getaway. Extending your stay, on the other hand, isn’t such a bad idea. 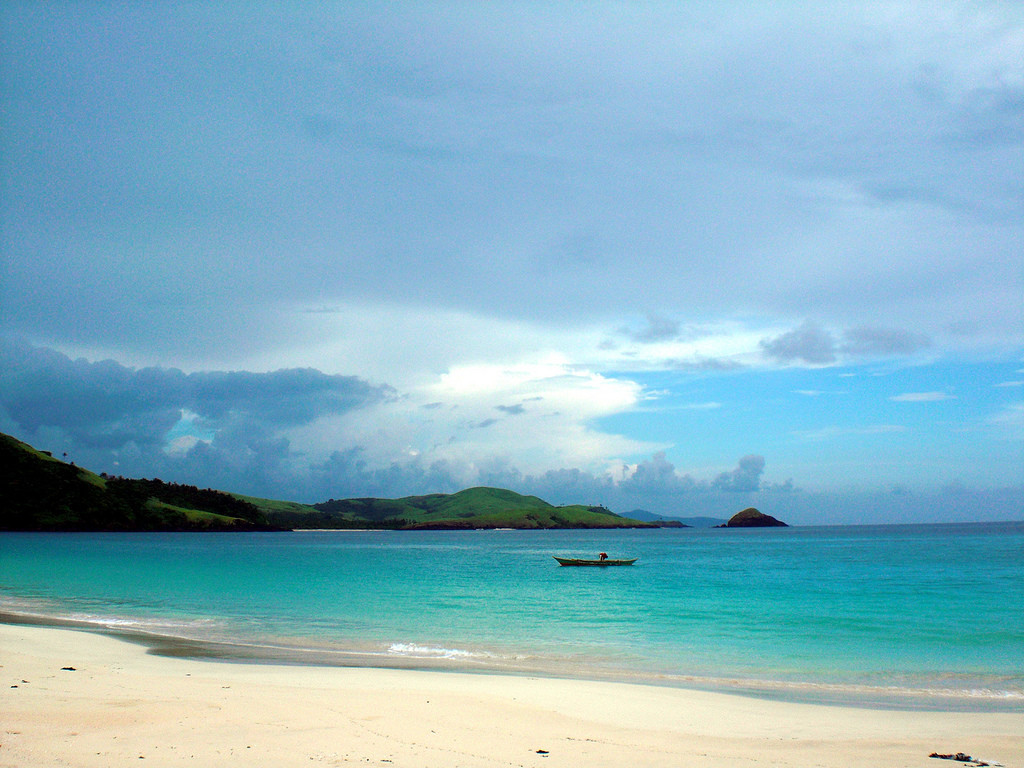 Not even the 10-hour travel time to Calaguas Island stops beach lovers from visiting this idyllic paradise of Camarines Norte for its powdery white sand and turquoise waters. Never mind camping under the stars if you have this wonderful view to wake up to.

The 45-hectare Apuao Grande Island used to be a luxury resort equipped with a nine-hole golf course, its own airstrip, and posh beachfront villas. Its luster may have faded but the island’s natural allure remains and continues to bedazzle visitors. Apuao Grande is also a good alternative to escape the jam-packed crowd of Calaguas during summer.

Tiny grains of crushed red pipe corals mixed with soft white sand creates the bizarre pink beach of Subic in Matnog, the southernmost town of Luzon. Sorsogon’s hidden gem is one the three known pink-sanded beaches in the country. While you’re there, check out schools of groupers, sea turtles, and lobsters, to name a few, in the protected underwater ecosystem of Juag Marine Lagoon Sanctuary.

Gigantes Group of Islands hosts a number of beaches, that you have to spend almost an entire day to visit them all. Choose from the iconic Cabugao Gamay Island’s petite paradise or picturesque white sand shores of Antonia Beach, the vanishing sands of Bantigue Sandbar or the enchanting Tangke Saltwater Lagoon. Yes, you’ll have to book a flight to get here, but it’s definitely a trip worth taking at least once in your life. There’s also a Spanish-colonial lighthouse, a series of caves, and an infinite supply of scallops. Oh, and it will only cost you PHP 200/person per night.

Read more about the Gigantes Islands.

Moalboal’s Panagsama Beach, also known as Basdiot, may not have long stretches of white sand, but what this beach lacks on land, it makes up for with what’s beneath the sea. Just a few meters offshore are coral reefs teeming with diverse aquatic species which makes Panagsama a perfect spot for snorkeling. Moalboal is also a world-renowned dive destination which features black tip sharks, white tip sharks, and tens of thousands of sardines. But if you’re not the diving type, you can also get a tan in Bas Dako’s two-kilometer white sand beach, only 15 minutes from Panagsama.

When discussing the best beaches in the Philippines, you cannot leave Bantayan Island off the list because it simply is one the best beaches in the Philippines. Santa Fe Beach may not have five-star resorts, the hippest bars, and fanciest restaurants, but it happens to be endowed with beaches as soft and as white as powder, and waters as blue as the clear summer sky. Bantayan Island, known for its laidback and rural lifestyle, is one tropical destination you wouldn’t want to miss.

Being off-course from the main highway makes the quiet town of Anini-y an overlooked travel destination. Anini-y is home to Nogas Island, an islet surrounded by thriving marine ecosystems frequented by divers from around the world. On the island, a path flanked by gigantic kalachuchi plants lead from the white sand shores to the island’s centerpiece, the Nogas Island Lighthouse.

Gumasa Beach serves as the epicenter of one of the biggest beach parties celebrated annually in the Philippines, the Sarangani Bay Festival or SarBay Fest. But when the music dies down and the three-day partying subsides, Glan’s famous fishing village switches back to its paradise-like state of fiery sunsets, tranquil tides, and two kilometers of white sand beach.

We’ve heard the term “secret beach” many times, but I think Tayandak White Beach is one of those that truly deserves the title. Kalamansig is a far-flung town in Sultan Kudarat rarely visited by tourists, especially northerners, but this town can offer beaches teeming with white sand and sprawling with coconut trees such as Tayandak. No resorts, no restaurants—nothing but pure beach goodness.

Jed Rosell, Ryan Panlilio, and Maru Sarmiento are the founders of Biyahe Lokal, one of the leading beach and group travel organizers in the Philippines. They’ve traveled hundreds of beaches across the Philippines, and have a unique expertise in local travel and tourism. From barkada outings to family trips and office adventures, Jed, Ryan, and Maru have seen it all.