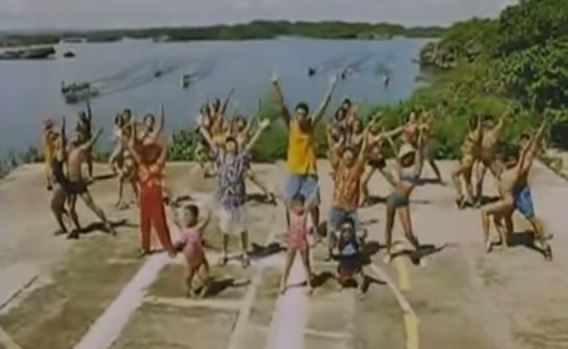 It’s officially summer! Many of us are dying to hit the beach as soon as possible, but while we’re still stuck with responsibilities, i.e. work and school, we can only daydream of getting sand on our toes. And what better way to fuel those daydreams than be inspired by the movies, particularly classic Pinoy comedy films. As anyone who loves watching local films knows, no Pinoy comedy film is complete without a song and dance number at the beach or by the pool. We have compiled and chosen 10 musical beach scenes that you might want to recreate on your next vacation. (We’re half-kidding, but bursting into song-and-dance at the beach seriously looks fun!)

RELATED: Cheap summer: 9 beaches near Manila on a tight budget

Watch it for: The surprisingly fun and easy-to-follow dance steps you and your crew should definitely try.

Watch it for: The cast gloriously descending on water slides in slow-mo, the heyday of Splash Island, and a young Herbert Bautista.

Watch it for: EVERYTHING, because it’s perfect. Donna Cruz sings “Kapag Tumibok ang Puso,” a song which she gamely performed at Yael Yuzon and Karylle’s wedding last year.

Watch it for: Childhood nostalgia.

Watch it for: More childhood nostalgia.

Watch it for: A singing and dancing Benjie Paras, plus people alternately popping out of coconut trees.

Watch it for: The classic “Entire Cast Gathers at the Beach While End Credits Roll” ending.

Watch it for: People just losing it and giving zero f*cks at a private resort.

Watch it for: A giant octopus slide, lechon, and a flashmob by the pool.

Watch it for: Bikini-clad ladies and happy children performing in one musical production.

Who said summer workshops are just for kids?