Riding the bus is like going to a party where you don’t know anybody. Every day, you are thrown into the moshpit of society. You brush against more shoulders than you can count. You contort into unimaginable positions in the presence of strangers. You learn to tolerate insects, BO, and other funny smells. (Seriously, what is up with that weird corn smell?) Sometimes, you are forced to make conversation.

RELATED: 7 Philippine maps they didn’t teach you in school

That’s the beauty of riding the bus—it tests your patience, builds your resilience, and brings you out of your comfort zone. Just like at parties, bus rides are where you can meet interesting characters. And if bus rides were indeed like real-life parties, where scoping out guys is socially acceptable behavior, not to mention a really fun activity, here are the ten different men you meet at the bus:

1 | The man with an invisible watermelon between his legs 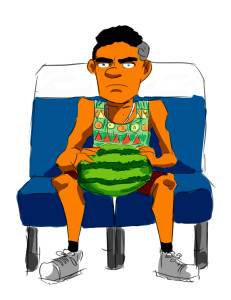 Paying for your bus ticket is basically paying for your seat. Well, if there is an available seat. You immediately resent and question the value of your bus ticket when you sit next to Watermelon Man. He widely spreads his legs, perhaps to aerate his nether regions. Your poor form gets squashed next to the bus window. Is there a watermelon surreptitiously lodged between your legs, good sir? Sitting next to Watermelon Man ensues in a power struggle, one that concerns personal space. Endure an uncomfortable bus ride as you grumble about men who don’t know when to give you space.

RELATED: All the types of passengers you’ll meet in a jeepney

Chivalry is dead, they say. In the age of Queen Bey and #HeForShe, women have come to terms with the fact that it isn’t men’s obligation to offer them seats. And that’s okay. We have mastered the art of standing inside a moving vehicle. So men should stop pretending that they’re asleep and can’t be bothered to give up their seats for women. By the way, you’re not very convincing: we can see your eyeballs moving.

3 | The conductor who gets too physical

The bus becomes packed pretty fast, especially at rush hour. Imagine how hard it is for kuya conductor to collect everybody’s fare. He has to squeeze through a bunch of irate office workers who get angrier when they’re told to move to the back of the bus. I understand your struggle, kuya. But just so you know, your butt (and sometimes crotch) has repeatedly crushed my shoulder each time you pass by my aisle seat.

RELATED: Drugs? Jollibee statue? Vigan City?! 14 of the craziest things you can buy on the internet

4 | The DJ who has never heard of earphones

Are you trying to copy John Cusack in “Say Anything” or are you just looking for attention? The bus may be as crowded as any rave party, but no one’s in the mood to raise the roof at eight in the morning.

The preacher boards all modes of public of transportation, but the bus seems to be his favorite. He stands up while the bus is moving, positions himself in front of everyone, and cracks open his Bible. He clears his throat and the Gospel pours forth from his mouth at a 90-decibel volume. He prays for a safe trip and calls his fellow passengers his brothers and sisters. After he promotes his Sunday morning gospel show, envelopes are passed around and you suddenly find yourself inserting a 20-peso bill inside one of them. Ah-men.

RELATED: Confessions of a jologita in Rockwell

6 | The working student who needs your generosity, in cash or in kind

A piece of paper the size of a calling card falls on your lap. In Comic Sans:

“Good day ma’am/sir. I am Mark, a working student. I am selling pastillas/ube tarts/buko pie/my heart and my soul to financially support my studies. J”

That is a valiant effort, Mark. I appreciate the free sample, but all I can taste are deception and lies. 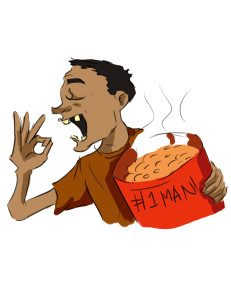 Vendors enter the bus and hawk their goods so you can have something to snack on while you’re stuck in traffic. Food choices from bus vendors vary from nuts to chicharon to one-dozen boxes of donuts. One time when I entered an LRT-Ayala bus, I caught a nutseller announcing to nobody in particular: “Ako lang ang may kayang magpasarap ng mani!”

Now, that’s what you call a hard sell.

RELATED: The secret stargazing spot in the heart of Metro Manila

8 | The “pedicab driver” who has serious mommy issues

The “pedicab driver” delivers his spiel preacher-style. Just last week, I chanced upon him on my ride home. The pedicab driver’s speech always starts with “Mamser, ako po’y hamak na pedicab driver lamang…” Then he explains his agenda in lurid detail: His mother was hit-and-run by an L300 van near the Goldilocks store at Buendia, so he’s asking passengers for donations. He claims he isn’t lying. He can show you his mother’s death certificate, which is most likely a masterpiece from Recto. And his wingman, a fellow “pedicab driver,” can attest to everything he says. The pedicab driver plays with your feelings by throwing his mommy issues in your face. Don’t fall for it.

9 | The college bro with the momol buddy

Routes along college campuses promise interesting bus rides. At the back of the bus, you’ll usually see two college kids, sometimes teenagers, who are seated so close together, they could pass of as Siamese twins. Sometimes they even sit on each other. They draw the curtains shut to create a semblance of privacy. You will overhear stuff like high-pitched giggles and “Ano ba beh.” Emphasis on the ‘H.’ Other times, you won’t hear words at all, but a series of…noises.

He’s the only guy who can make you give it up in a matter of seconds. “It” meaning your iPad, phone, cash, barya, what have you. You have told people that you like bad boys. Momma, I’m in love with a criminal and all that. But why is being held-up by this thug, who is the very definition of a bad boy, feel like a living nightmare instead of a dream? I don’t know, but whatever the reason is, putting up a fight is futile. Just give it up and let it go, Elsa.

Illustrations by Karen Tordecilla for Pacifiqa

Glicos, Boom na Boom, and all the happy places we used to love